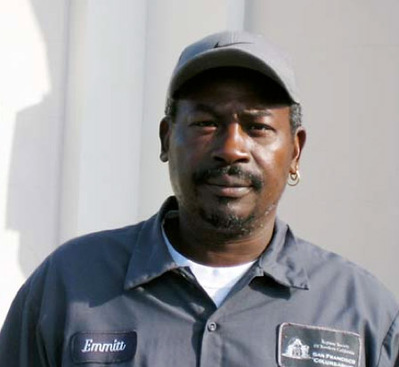 If you think trying to find a place to live in San Francisco is rough, try finding a place for your mortal remains to rest.

At one time, there were more than 20 cemeteries within the city limits. But in the early 1900s, most of those graves were moved south to Colma to make room for the living. The San Francisco Columbarium was allowed to stay. Although the building was abandoned in 1934, it was rescued and restored by the Neptune Society in 1979.

Around 65,000, but that's a guess. There are 7,500 individual niches -- I call them apartments, actually -- but in the old days everybody got dumped into the same container. So you may have five, 10, 15 people sharing the same space.

You call them apartments?

When I say niche, to me that sounds morbid. Apartment sounds better. After all, it's where you're going to be for a long time. Most families, when they come here, they say, "I'm going to my mother's apartment."

You've been working at the columbarium for 19 years. How did you get the job?

I was working for a construction company in Oakland, and one day I came here to paint the outside of this building. One of the owners asked me if I would consider working for him.

My first question to him was, "Why?" He told me because he saw me one day climb up a 40-foot ladder to touch a spot that ain't nobody gonna see in the first place. And he said: "I see you be the first one here in the morning and the last one to leave. I would like somebody like that working for me."

I had no idea, because I never stuck my head inside. When I did, I thought this was about the spookiest place I ever saw in my life. There were pigeons nesting inside and mushrooms growing all out of the walls -- and mildew.

It was all dark, too. First thing I decided was to change the colors. I painted colors that represented life because -- most people don't think about this, but the dead do not walk in here. It's the living that come to visit.

Most people would have a hard time working in a cemetery. How about you?

I didn't like it at first. It's programming. We're programmed to fear death from the time we are a little-bitty kid on up. So I had to un-program myself.

How did you do that?

I asked myself, "What about death scares you?" I thought about that, and I couldn't come up with an answer that satisfied me. Then I thought, "What should I be afraid of, the living or the dead?" Well, the living, of course! The living can send you to the graveyard, but the dead can't hurt you. So I started training myself on dealing with the living and ignoring all this stuff about death.

What do you think happens when people die?

I don't think people die -- the body dies, and we are not the body. We are the soul. I just can't see a soul dying because a soul is like -- invisible. How do you kill something invisible that you can't even see? I can't say where the soul goes, and at this point I don't want to know where it goes, because I would have to go there to find out. I just have the funny feeling that when your body dies your soul can't live there no more, and it has to go somewhere, maybe back to God. Maybe it goes into the next newborn baby. Who knows?

Are you afraid to die?

No. That's the least thought in my mind. I've learned never to fear my destiny. I'm not jumping up and down and saying, "I can't wait till I die!" But I'm not afraid of it either.

What would you say is the hardest thing about your job?

The hardest thing is when a loved one has passed away and I've got to stand there and look at the person who has just lost someone. I feel their pain.

I used to keep my distance. That was my defense. I figured, it won't hurt me because I don't know you [the grieving person]. Until one day, I walked out there to take a smoke break, and I saw this man and this lady standing in the parking lot, crying. I kind of looked over there, and I said to myself, "I don't know them." But I just kept looking. I ain't never did that before. And the next thing I know, tears were dropping out of my eyes. I was thinking: "What are you crying for? You don't know these people!"

Something made me walk over to them. I didn't now what to say because, really, what can you say? But I couldn't stop myself. So I introduced myself. I took that man's hand. I took that woman's hand -- they allowed me to do that. They ain't never seen me before in their lives! I say: "I'm sorry for your loss, and I know that there is not much I can do. But I'm going to make you one promise. I promise you I'll take care of your loved one."

I noticed that some of the people visiting today brought you gifts. Does that happen a lot?

Yes. I think it shows they really do appreciate me. I've got a lot of people that will tell me: "Don't you die!" "Don't you die! Because I need you." It makes me feel good that they feel comfortable enough to know that I'm watching over their loved ones. But I can't stay here forever. I'm planning to retire at 60.

Are going to be buried here when you die?

No. I'm spending my life here. I do not want to spend eternity here, too. Besides, my soul is gonna be all over this building. Did you ever hear people say that when a person dies they go roam the place they hung at? This is my spot -- my love and everything else about me is here.

Where do you want to go as your final resting place?

In a paint bucket inside the house. I got the idea from some of these families here. They put objects in their apartments, whatever their loved ones treasured. I want to be in a paint bucket because I'm a painter. That's what I do. Besides, my loved ones need the money. I don't need no $5,000 casket.

You grew up in Hammond, Louisiana, before the civil rights era. As a black man living in the South during segregation, how did that affect you personally?

I must say, if I search my mind, which I try not to, it made me mad as hell. I couldn't figure it out. What did black people do to white people to be treated like that? Why can't I go and sit right beside you in a restaurant? Why can't I drink out of that water fountain? Why can't I go to that bathroom? Those were big question marks in my mind.

So how did you answer those questions?

There are many answers. I came up with a couple of possibilities. One was, "You [racists] are stupid." Another was, "The devil gotcha." Because the devil loves to create problems between us. He knows that his time is up. So he wants to take as many of us, me and you, with him.

Do you consider yourself a religious person?

I wouldn't say I'm 100 percent Christian, I don't be going to church like my Mama and my Grandma did. As I got older, I went a few times, but then I started backing away from it because I wasn't learning nothing.

I've seen people sit there and worship like a son of a gun, and walk out of there and be the same person they was when they went in there. To me, something was wrong with that picture. I don't believe you have to go to church to be religious. You can't hide nothing from God. He is everywhere. And it's up to him to judge if my beliefs are right or wrong.

Do you ever pray?

Yes, every single morning. I pray when I get here -- because this brings me to reality, lets me know I could be like one of these people. The first thing I do, when I walk in those doors, I holler, "Good morning, y'all!" I'm going to say good morning to everyone in here.

Do you think your life has a purpose, and if so, what is it?

All of our lives have a purpose. My purpose in life is to cheer people up that come in and out of this place -- I know that right now. That smile probably doesn't last too long. But if it lasts one second, I'll have accomplished what I have tried to do.