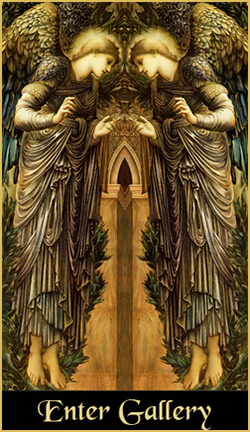 Located on the west bank of the Willamette River, River View Cemetery is aptly named. Its 350 acres rest largely on hillsides and this makes driving and walking quite interesting. Few large, flat areas exist and this fact, coupled with the proliferation of evergreens and frequent rain make the grounds lush and, at times quite slick as moss grows on the few sandstone walks available for travel.

If you are a lover of graveyards rich in statuary and monolithic crypts, you will likely be as disappointed as we at Bella Morte were on the day we explored River View. Few private family mausoleums exist. Indeed, there are only eight in the entire cemetery! And there are even fewer dramatic statues to rise above the green, pine-cone covered lawns. The place is peaceful, and we were appreciative of that, but (you’ll forgive the pun) it is also quite dead. By this, we mean there is no magical aura—something we earnestly seek in cemeteries. A handful of obelisks and Celtic crosses punctuate certain areas, but, for the most part, visitors are left to wander among flat or raised but unremarkable stones.

We spent the lion’s share of our time in the four-story Main Mausoleum and even that was hardly engaging. It features the 1940’s era Charles Francis Adams Memorial Chapel which is most notable for its soaring arched ceiling and warm, golden lighting. There are some glass front niches, but none contained urns of any particular interest.

The Hilltop Garden Mausoleum is an outdoor structure which affords eternal views of Mt. Hood, Mt. St. Helens and the winding Willamette River. There is also the Wall of Remembrance which features a serpentine wall and a bronze Angel of Hope sculpture.
The most interesting story we came across had to do with one of the Cemetery’s founders, William Sargent Ladd. Mr. Ladd moved to Portland in 1851 with cash sufficient to last him only two weeks. He began a small liquor and grocery store, got involved in politics and eventually made his fortune doing business with gold traders. We couldn’t have cared less about that part of the story—it’s what occurred post mortem that got our attention. Mr. Ladd died in 1893—on the 9th of January his body was buried at River View. Four years later, on the 18th of May, 1897, a cemetery worker noticed Mr. Ladd’s grave had been disturbed. Actually, it had been robbed! The metal coffin had been cut open on three sides, and Mr. Ladd’s body removed. It took several days for police to locate the body, which was discovered on the banks of the Willamette River. Apparently, a group of four men stole the corpse (and the grave marker as well) in hopes of obtaining a fortune in ransom. Instead, what they got was jail time. Mr. Ladd’s body was re-interred, but not with a traditional dirt covering. The grave was filled with cement and a 24-hour guard was placed at the site until it was completely hardened.

River View Cemetery is worth visiting if your aim is a nice nature walk in a largely-unvisited place with nice views of distant mountains. If, on the other hand, you want good creepy fun, or to enjoy the splendour of a Victorian cemetery, you will do better to stay away from River View altogether.