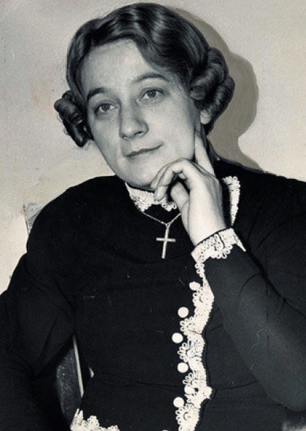 Anna Marie Hahn, convicted of poisoning an old man for his money, died in the electric chair at the Ohio state prison tonight. She. was the first woman to be electrocuted in this state.

She went to her death pleading that her life be spared for the sake of her illegitimate son, Oscar, 12 years old. The current was turned on at 7:09 p. m., Chicago time, and she was pronounced dead six minutes later.

The Cincinnati slayer, who repeatedly had expressed confidence that she never would be executed, col- lapsed at the door of the execution chamber and had to be carried to the electric chair.

Asks to Be Saved.

When no one answered she beckoned to the prison chaplain, the Rev. John A. Sullivan, and murmured: "Father, come close.”


Attendants quickly fastened the clamps, pulling up one leg of the blue pajamas in which she was clad. In a moment all was in readiness. Anna was intoning the Lord's Prayer when the current coursed through her body.

The last hope of the condemned woman, who had been accused of " the biggest mass murder in this country," faded only about an hour before she was taken to the execution chamber. Federal District Judge Melt G. Underwood denied her attorney’s plea for a writ of habeas corpus to stay her death.

Mrs. Hahn, 32 years old, a comely German born woman who never had been admitted to United States citizenship, was convicted in Cincinnati a year ago of poisoning a retired gardener, Jacob Wagner, 78 years old. It was charged she killed him for his money, most of which she used to bet on horse races.

She also was accused of having poisoned three other men who died and a fourth who is paralyzed. It was charged that numerous other persons with whom she came in contact. most of them elderly German born Cincinnati, became seriously ill after she had prepared food or had otherwise cared for them.

Throughout her trial and-the year that followed, Mrs. Hahn exhibited iron nerves and a supreme confidence that she never would be executed. Her composure cracked last night when she was informed that Gov. Martin L. Davey had refused to intervene.

"I had no idea he would do this to me," she moaned in her special death row cell. She finally fell in a faint but was revived and put to bed, where she sobbed herself into a fitful sleep.

She still was shaken today and what little composure she had dwindled in pace with the passing of her scheduled hours of life. Her son visited her this afternoon and was far more calm than his mother, although he had been told she was to die.

The boy was permitted to stay in her cell until she had her last meal less than three hours before she was led to the electric chair.

Mrs. Hahn's attorney, Joseph H. Hoodin, asked permission to confront the governor with her son in a last desperate plea for clemency, but Davey said he would not see them. The child, born in Germany of a father he never saw, has been living in Cincinnati with the parents of his stepfather, Philip Hahn, a telegrapher.
blooded, so deliberately planned and executed, that they horrified people who followed her trial.

"I feel sorry for her boy, but I think his mother has been most unfair to him. What could I say to the mothers whose sons have had to die in the chair for only one murder? So the decision is made, and I hope that somehow or other society will be benefited."