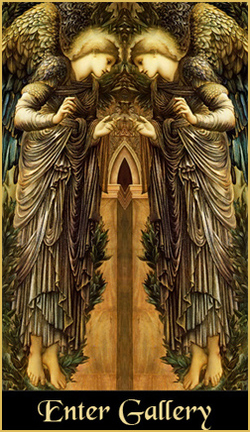 Let us begin with a stern warning…if you are not in the area visiting Dayton’s taphophilic treasure, Woodland Cemetery, about 15 minutes due south of Dayton Memorial Park, do not make a special trip to visit the Abbey. That being said, if you find yourself in the area, you could do far worse than take a dip into this otherwise tedious cemetery to enter this genuinely creepy mausoleum. Drive all the way to the back of the cemetery to reach the Abbey.
_____________

On the day we visited, it was approximately 70 degrees outside; however, one would never have supposed that upon entering this marble behemoth whose icy interior stood somewhere around 50 degrees upstairs and, in its black basement, even colder! Initially, we thought the Abbey was freezing over at the hands of a prankster who dialed the thermostat WAY down, but that was not the case as we discovered upon descending into the basement where only an industrial-sized dehumidifier whirred and wheezed! There is no air conditioning in the place!

The building, though simple in design, is elegant and lovely. The altar, which gleams beneath three soaring stained-glass windows, is well-maintained. The all-too-common odour of decay was absent (though, in fairness, this could have owed more to the cold than proper ventilation). Nothing appeared out of place, but even that did nothing to dispel a vague sense of unease…the feeling you are not truly alone within that marble enclosure.

The frigid temperatures caused many of the crypt fronts to sweat with condensate, deepening the already-forlorn aura of the mausoleum. Please understand, we are not the type to be spooked by places where the dead rest. Indeed, we love the atmosphere of most burial grounds and mausoleums, but there was something about this place that elicited unease. Perhaps it was the absurd contrast in temperature between the outside world and its silent interior…perhaps it was the hint of an anthropomorphic shadow here and there, drifting around a corner or seeming to float up toward the lofty ceiling…whatever the cause, the place was certifiably creepy…and that was part of the fun of it!

At the terminus of each corridor stands a white marble figure of a religious personage, mourner or angel. Oddly, despite the stained glass windows above and the bright spring sun outside, light seemed incapable of truly illuminating these. This gave the disconcerting impression that someone…or something…was lurking in the blackness at the end of the hallways.

Another thing. Despite the lack of wind outside, one of the two heavy bronze front doors continued to pop open no matter how sincerely we attempted to get it to stay closed. We would pull hard so that both doors would audibly click and lock into place, but a moment later, as we wandered downstairs or into a corridor, we would hear the one on the right snap open. Now, we are wholly inclined to credit this to a faulting locking device or even doors no longer quite plumb…that being said, it certainly added to the “spooky” feeling cast by the Abbey.

Okay…it’s ominous. It’s foreboding. It’s creepy. Personally, we found these things delightful; however, if “scary” isn’t your cup of tea, you might prefer to visit in order to pay your respects to the mortal remains of Agnes Moorehead (the actress who played the role of Endora, the cantankerous Witch-Mother of Samantha Stevens, in the 1960s sitcom “Bewitched”). She lies within the Abbey, in a single crypt, beside her parents. [To locate her, go up the stairs as you enter the mausoleum. Turn left into the first corridor and look to your right. Agne’s crypt-front is eternally decorated with a pink wreath, so it’s easy to spot.

You may ask yourself, “How does a famous Hollywood “Witch” end up in an icy mausoleum in Dayton, Ohio?” We wondered the same thing and were interested to discover Agnes’ father was a Presbyterian minister whose last assignment had him living and preaching in Dayton. Agnes spent many days on a farm she owned in nearby Hamilton, Ohio—a place she purchased in order to be able to spend time near her parents and away from the clamour and bustle of Hollywood.

Rumour has it the actress contracted uterine cancer following exposure to radiation while filming downwind of Yucca Flat, a nuclear test site in Nevada. It is said that 90 of the 220 crew and cast members of "The Conquerer" contracted cancer and 46 (including Agnes) died of some form of the disease.

Whether the cause was radiation or something else, there was no doubt Agnes had cancer and she drew her last breath on the 30th of April, 1974 while hospitalized in Rochester, Minnesota. Her body was returned to Dayton and entombed within the Abbey, beside her father. Her mother did not join her loved ones in death until 16 years had passed. She was 106!

Aside from the delightfully chilling (and chilly!) Abbey, there is a Gothic bell tower on the cemetery grounds which is rather comely. The same cannot be said for the entirely horrid “Whispering Pines Mausoleum,” which was constructed in 2007. It offers 96 single, and 108 companion crypts in a sterile and utterly boring structure. The rest of the cemetery is sadly unremarkable.

If you do venture to the Dayton Memorial Abbey, we wish you the pleasure of a somewhat unsettling visit. And don’t forget a jacket!