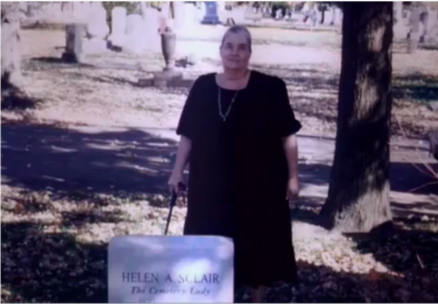 Helen Sclair's address during the last years of her life will remain unchanged into eternity.

A recognized authority on cemeteries and burial practices, Mrs. Sclair lived in a house on the grounds of Bohemian National Cemetery on Chicago's Northwest Side since about 2001. Her cremated remains will rest not far away under a granite stone bearing the inscription, "The Cemetery Lady, An Advocate for the Dead."

Mrs. Sclair, 78, died of cardiac arrest on Wednesday, Dec. 16, in the Harmony Healthcare and Rehab Center in Chicago, where she had been recovering from surgery, said her daughter, Lu Helen Sclair.

Mrs. Sclair lectured around the country to groups like the Association for Gravestone Studies, taught on burial and genealogical related topics at the Newberry Library, and possessed encyclopedic knowledge of Chicago-area cemeteries.

"It made her feel connected to the family and the person who died," Sclair said. "It was important for her to see where the person was laid to rest."

In 1991, she made significant discoveries on Chicago's early years while scouring records made available through the Illinois Regional Archives Depository System at Northeastern Illinois University.

She found that some families were trying to get their ancestors' remains out of Lincoln Park as recently as 1900, leading her to believe that old bones still linger beneath the lakefront park. Her work also sharpened knowledge of the immigration patterns that shaped Chicago.

The documents she dug up were, said one historian at the time, a million-to-one shot, comparable to finding a painting by an old master in an attic trunk.

Her fascination with cemeteries dated to her childhood in bucolic Lake County. Born Helen Young, her mother died shortly after her birth, and she was raised by close friend of her mother's on a duck farm.


In Studs Terkel's book "Will the Circle Be Unbroken?: Reflections on Death, Rebirth and Hunger for a Faith," Mrs. Sclair recalled that "the first thing my foster family did was take me to visit my mother's grave down in southern Illinois."

Later, she spent weekends tending grave markers at a local cemetery, trimming the grass and watering flowers. She felt an earlier generation had a better handle on death, and studied the old rituals that marked human passing, her daughter said.

Her father, Irvin Young, was an entrepreneur and former missionary in Africa who helped his friend Marlin Perkins bring gorillas to Lincoln Park Zoo.