Given the 5-Tombstone rating, visitors to Loudon Park Cemetery may, upon entering the front gates, wonder if we somehow mixed up our reviews or perhaps were somehow addled at the time of our visit. This owes to the fact that the newest part of Loudon Park is also the main entrance and, like so many modern cemeteries, it has succumbed to the current, bland, funerary sensibilities of many Americans as well as an impulse that puts expedience and utilitarianism before aesthetics.

We credit the weather with its dark, brooding skies for encouraging us to venture further inside when, upon entering, we were confronted with flat, uninspired expanses of grass which, on a sunny day, would have inspired a pedal-to-the-metal dash toward the exit. Instead, lulled by distant thunder, we meandered toward the older sections which, like the falling away of blinders, opens a world of sheer magic to those who revel in the splendor of Victorian funereal sensibilities.

To reach this beautiful necropolis, one must pass through aforementioned horrors; however, if paying attention, tantalizing hints of promise in the form of several stately mausoleums (esp. that belonging to the Wilkens family) will encourage persistence. In fact, two sculptures, altogether disarming in their beauty, reside in the less-than-ideal western section of Loudon Park. We are here referring to the Husted-Klenle and Krug family bronzes, both rendered by sculptor Hans Schuler, the first American to ever win the prestigious Salon Gold Medal. The former depicts a woman in flowing gown and bare feet. Her shapely right breast is exposed and she kneels, forever frozen in the act of offering, in her extended right hand, a flower at the family grave. In her lap, a spray of roses appear to tumble from the cloth in which she bore them to that spot. The latter perches atop a gracefully-curved pedestal. Like her sister across the way, she wears a dramatically flowing gown. She appears lost in reverie, veiled head bent, chin cupped in her palm as she peers down upon an enormous tome which rests in her lap. Her bare feet dangle at eye-level and invite a soft caress. To our minds, this ranks among the most beautiful sculptures we have had the pleasure to see in person. [Note: Elsewhere, two far less dramatic and impressive Schuler monuments honoring the Nitze and Kaiser families, grace the grounds of Loudon Park].

As a point of further interest, two more sculptures that rank among our favorites are also the creations of Mr. Schuler’s talented hands. They stand in nearby Green Mount Cemetery and go by the names of “Meditation” and “Memory.” (see separate review)

Driving further into the heart of the cemetery, one notices the monuments beginning to reach greater heights. Like an old-growth forest, the deeper one goes, the more towering specimens begin to appear. This is most satisfactorily accomplished by crossing a bridge over a “waterfall” which, on the day of our visit (which came of the heels of a downpour) was almost frightening in its ferocity! If, on the other hand, you happen to be entering via the roadway further east, you will know you are getting closer to the promised land when you notice a small “forest” to the left while, on the right, a broad field of flat markers stretches before a commanding stand of trees that seem to form a living fence.

There are far too many notable monuments to document in a review of this nature. Angels, mourning women, towering obelisks and bronze medallions abound. Rather than attempt to describe them all, we shall focus on three unique offerings and leave the rest for you to discover on your own.

The first belongs to the Wiessner family. Its marble tower thrusts an astonishing 30’ skyward and features a host of graceful figures (including angels and pensive women). Sheaves of cut and bound barley are also depicted and these may reference the family’s means of acquiring their wealth…namely, the production of beer which they purveyed at their establishment, the Gay Street Brewhouse.

Not far distant from this monument is a mausoleum we note not because of its beauty or grandeur, but because of its most-peculiar features. We are referring to the tomb of R. B. Fitzgerald who, it seems, was a Captain in the Union Army. Three things, each more intriguing than the last, make the mausoleum remarkable The first is an unusual checkerboard walkway which leads to the cemented door. Next is the black wrought-iron fence which surrounds the plot. If you are wondering why a fence is unusual, it is because this one boasts two birds (they appear to be ravens) which perch on either side of the locked front gate. But the most enticing feature of the plot are the four large plywood boxes which stand sentinel in the long grass. Clearly, they are covering (protecting?) “something,” but what that might be is a mystery. Sculptures? Most likely. But of what? And why were they sealed…and in such an unbecoming manner? 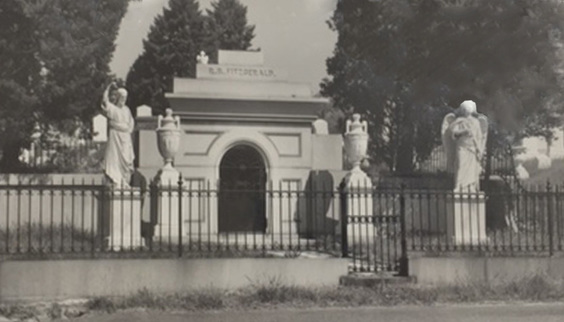 UPDATE: (Feb., 2014) Special thanks to Jason Gauthier of Riviera Beach, MD for, at long last, solving the mystery with the discovery of this article. Again, many thanks, Jason!

UPDATE 2: (April, 2015)  Thanks to the kindness of Loudon Park Cemetery, we are able to offer this photo of the monument as it appears when the protective cases are removed from the statues.
Finally, there is the Weiskittel burial vault which was listed on the National Register of Historic Places in 1978. At first glance, you will undoubtedly wonder what is special about it. After all, it is simply a plain, rectangular structure which bears no apparent distinguishing feature. If anything, it is somewhat of an eyesore and definitely not possessing any of the romantic features one might expect from its Victorian pedigree. But approach the building and you will soon realize what appears to be a grey masonry facade is actually nothing of the sort. It is, in fact, iron fashioned to resemble stone. You see, its occupant, one Anton W. Weiskittel, made his fortune with an iron foundry that produced cast-iron stoves in Baltimore. Quite interesting!

Perhaps our favorite place in Loudon Park is one that is no longer in use. In fact, it would be easy to overlook, standing, as it does, along the western portion of the cemetery in a rather desolate spot that whispers of abandonment and the ultimate ruin of things manmade. Built into a hillside, only the grey stone facade is visible to viewers. A cross at the apex rests on a base-stone engraved with the year of its establishment, 1873. A large, central, circular opening which once featured a lovely stained-glass rose window now gapes like a vacuous, cyclopean eye beneath which an ornately-engraved stone declares the structure’s former purpose with a single word…MAUSOLEUM.

And yet, as you shall see, that word is actually a misnomer!

Approach the building’s iron gates and lean into the darkness. If you wait a moment, you will be treated to the phenomenon we affectionately refer to as “exhalation.” It is, to our minds, a charming feature of crypts such as this that the ever-cool interior air will be pushed out on even the calmest of days through some mechanism of physics we don’t really understand. Breathe deep and the building will impart the rich scents of age, decay and dampness to you. Allow your eyes to adjust and you will behold a large reception room at the back of which stands a dark, sealed and tantalizing door. Look up, and you will see the shattered but still beautiful arch of green and brown stained glass which once must have bathed the hidden interior in earth-toned light.

So, why do we say the term “mausoleum” is a misnomer? It is because this building was never intended for, or used as, a place of permanent, above-ground residence for the dead. It was actually a receiving vault! As evidence, allow us to copy for you an excerpt from H. L. Mencken’s 1902 pamphlet, entitled LOUDON PARK CEMETERY COMPANY.

It seems to be a custom peculiar to Baltimore alone for families to defer the purchase of burial lots until death occurs, when in the confusion of grief and haste  purchasers frequently make selections which they afterward regret. To obviate this, the Loudon Park Mausoleum was erected. It is a modern building of artistic and appropriate design, and because of the fact that the chamber in 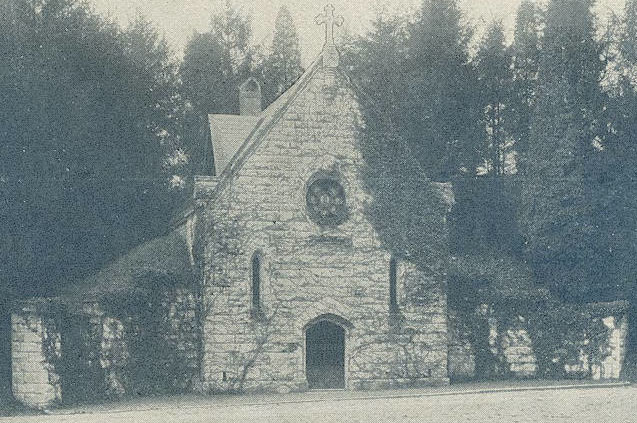 Photo: Receiving Vault a/k/a Mausoleum circa 1900
which remains are is built in the solid native rock, their preservation for long periods is insured. This is shown daily when bodies are removed to be interred in the ground.
The Mausoleum is for the use of lot-owners and of those contemplating the purchase
of lots. As a protection against vandals the entire cemetery is patrolled day and
night by trusted watchmen. These men, by means of an electric system of clocks and
alarms, are under the direct control of the Superintendent at all times, and they constitute a guard such as is probably unequaled in any other burial place in the United States.
It is also interesting to note the directness by which death and the disposition of the deceased are addressed. This speaks to a culture which, unlike ours, was not squeamish or afraid to confront the reality of mortality.

Elsewhere in the pamphlet, readers are treated to a charming description of Loudon Park’s amenities:

FOR THE COMFORT OF VISITORS

In every possible manner the company has arranged for the comfort and
convenience of lot-owners and visitors. Large and well-stocked greenhouses are
maintained and near the main entrance has been erected a modern conservatory, whereat
all sorts of plants and growing and cut flowers can be obtained at reasonable prices.
Plants purchased here will be planted free of charge by the company’s florists. For
the protection of those attending interments large canvas tents have been provided.
These are effective guards against wind, rain, snow and sun, and are practically
moving chapels. The permanent chapel, thoroughly heated in cold weather, is opened
for funeral services free of charge, upon notice to the Superintendent. The latest
and most improved lowering devices are employed at interments and a capable corps
of attendants is provided. For the use of those who favor cremation of the dead
the cemetery offers a modern Crematorium--one of the best in the country.
~~~~~~~~~~~~~

And, finally, we offer a price list from the same source. 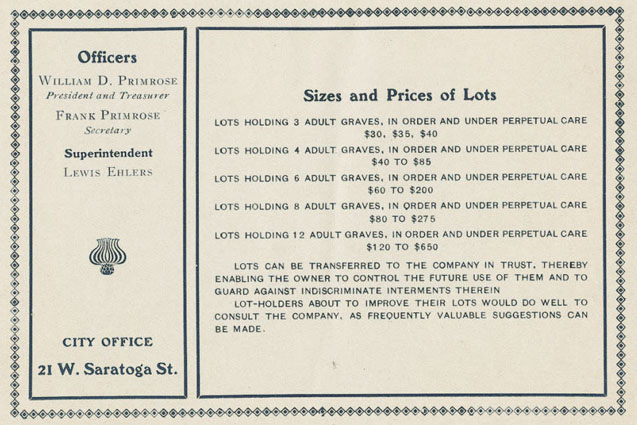 No trip to Baltimore would be complete for any self-respecting taphophile if it did not include the dedication of at least four or five hours to the exploration and enjoyment of Loudon Park Cemetery’s historic sections.

NOTE: Although we at Bella Morte are not particularly interested in Civil War cemeteries, we would be remiss if we failed to note that, bordering Loudon Park’s northeastern-most section is the Loudon Park National Cemetery (est. 1862). It is one of fourteen such burial grounds established during the Civil War under the auspices of the U.S. Government. National Cemeteries were originally intended for Union Soldiers only. Later, members of the Confederacy were, albeit grudgingly, afforded burial there as well. The Loudon Park National Cemetery encompasses 5.25 acres and embraces within its soil the remains of 2,300 Union soldiers and 600 Confederates.